Prepping the Foundation Before Foam.

Thermal bridging through foundation walls can lead to significant energy loss/gain in any building, whether super-insulated or not.  There are several options available to decrease thermal bridging through a concrete foundation.  An insulated concrete form (ICF) is one of the first products that comes to mind to mitigate energy loss/gain through concrete.  We decided agains ICF mainly because the footings have to be pretty level in order for the forms to be level.   In a poured concrete wall, if the footings aren't perfectly level, a reference level can be maintained inside the concrete form panels by attaching a 2x4 and levelling using a transit all the way around the form.  Once the concrete is poured into the form, it is levelled to the bottom of the 2x4 giving a perfectly level wall once the forms are stripped.   Since this is a common local practice, it seemed like a good place to start.  Adding EPS insulation on the exterior of the foundation for the whole structure (although not necessary for the garage/porch) and the interior foundation walls for the house then creates a kind of poor mans ICF.

The forms used for pouring the foundation are reinforced with steel straps and have clips that join adjacent panels.   The interior and exterior panels are the joined together with a reinforcing rod which keeps the panels from splaying apart once the concrete is poured.  Once the forms are removed it leaves a steel connector protruding through the concrete as well as a knob of concrete which gets in the way of applying exterior foam (Picture 1 below).  Each steel connector can be removed with a swift blow from a hammer.  However, usually a knob of concrete remains intact (Picture 2).  I have found that using a masonry hammer at the right angle and applying a swift blow from a framing hammer to the masonry anvil breaks it off in once piece.  If not some minor chipping is required.  The concrete flies everywhere so you need to make sure that your safety glasses are on!

The broken steel rod provides a way for water to enter the foundation and can rust the connector rod. Traditionally, people have patched this with plastic cement.  Its a simple cost effective solution (Picture 4).  There are very few local options for water/damp proofing the foundation.  Nobody sprays special coatings and stick on membranes are typically special order so I opted for locally available products in order to keep things simple.  We decided to use ResistoSeal Foundation Coating (or equivalent) which is a bitumen based sealer which hardens once the solvents evaporate (Picture 5).  Its hardly a green product but it is a cost effective option that is readily used by local builders.  Nobody said this stuff is fun to work with...it goes everywhere!  Being next to the 3rd windiest city in the world (St. John's) makes this stuff drift horizontally as you are lifting your roller from the rolling tray.  Needless to say, my father and I got suited up in disposable tyvek suits before opening the first bucket because we knew what to expect.  Disposable gloves and old boots were a necessity.  Although dry, the air was cold and so was the foundation....2 deg C!  The buckets of sealer were kept at my house until we needed them because it became so hard to roll once the liquid became thick. In fact, you could feel the resistance on the roller almost immediately after the roller touched the cold concrete wall.  Despite being cold, 4 hours later, we were all done!  The section we had started with wasn't tacky anymore and was drying nicely.

The footings are also slated to be brushed with this sealer.  Brushing became near to impossible because it was too cold.  Tomorrow will be 11 deg C and sunny....better than this grey foggy day.... 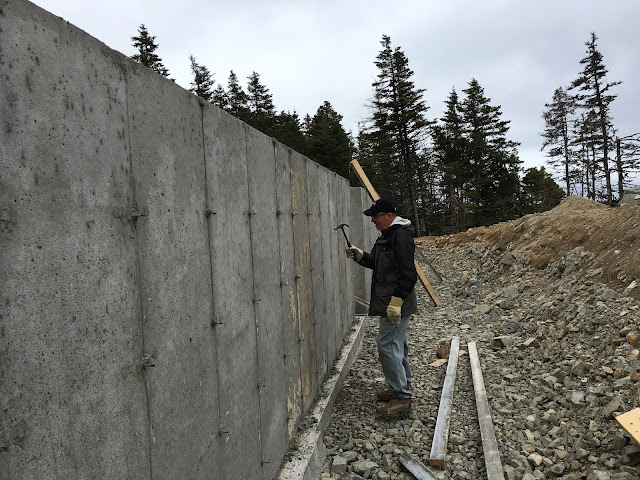 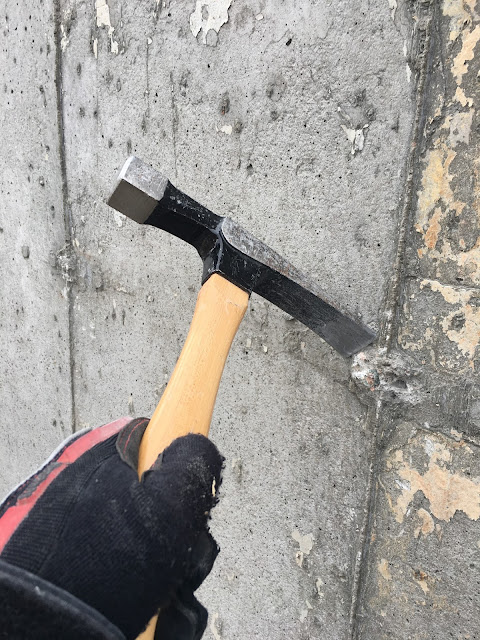 Picture 2. Chipping away a knob of concrete left from forming. 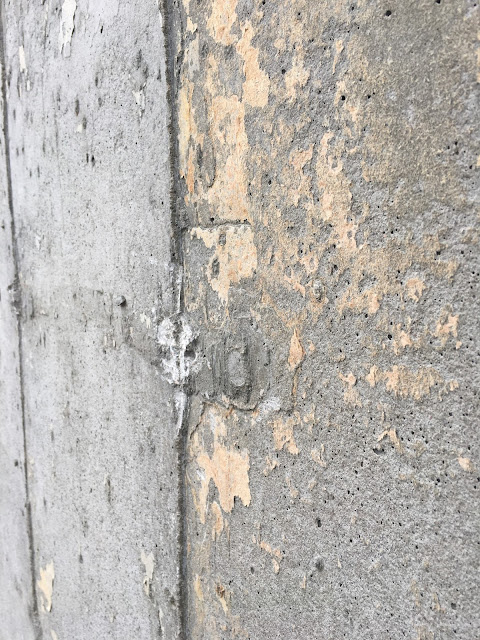 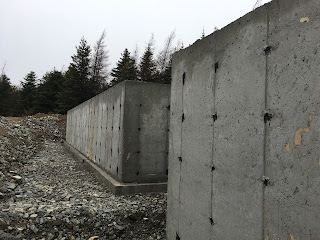 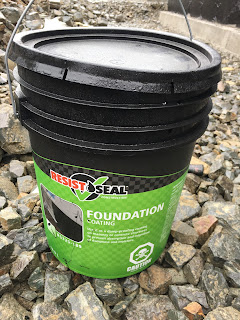 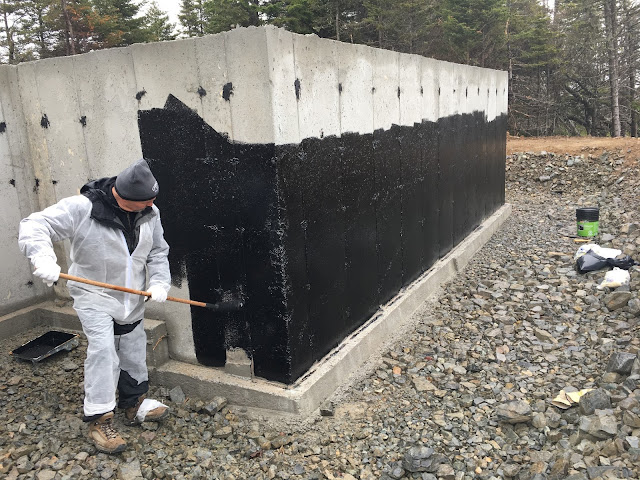 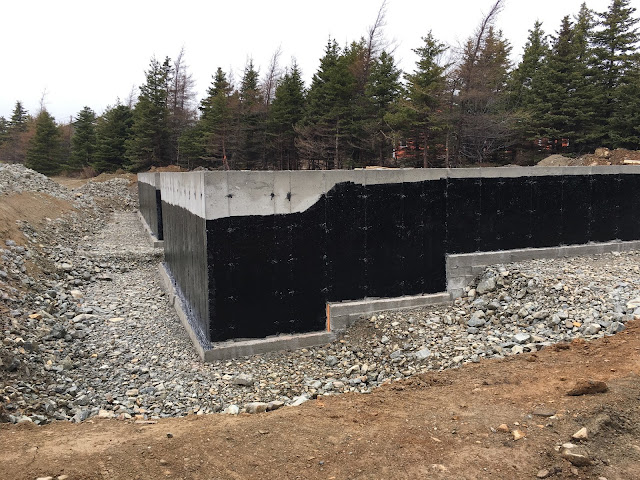