A Tale of Two Foundations.

Since the home design has been completed, I've been studying the drawings over and over again.  Every couple of days I come across an interesting conundrum.  This one is a tale of two foundations.  One of the principles of Passive House is building an efficient envelope which is super insulated, air tight and thermal bridge free.  If a foundation in a cold space is joined to a foundation in a heated space then there is potential for several issues.  First it provides a short circuit for heat to travel outside of the thermal envelope during heating season and for heat to enter the envelope during cooling season.  this could also lead to interstitial condensation in the walls would lead to mould issues inside the wall at the junction of the short circuit.  To minimize this transfer  the designer wanted to separate the  thermal envelope of the house from the porch using 2" of EPS foam as seen below: 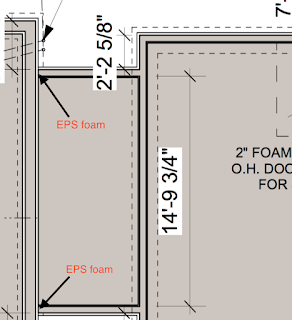 Because of the way that the forms are connected it would be possible to insert a piece of foam at the connection between the two foundations i.e. house and porch/garage.  However,  once the concrete is poured there was no guarantee that the foam would stay in place.  Additionally, there would be no way for the two foundations to be connected.  So is there a way to do this using fancy passive house materials?...probably.  However, I have to work with what I have.  Our solution to the problem is two pours.  The house foundation was poured today.  Tomorrow the forms will be removed and a piece of foam 8" wide will be glued to the foundation at the point of connection between the two walls.  Homes will be drilled regularly spaced through the foam and into the newly hardened concrete.  Epoxy will be used to glue the rebar in the holes.  The forms will be erected and the concrete will be poured.  Once hardened, the rebar will form a semi-regid connection between the two foundations.

Is there an energy penalty for using rebar? There definitely is! It is a thermal bridge directly into the foundation. But since the heat flow is proportional to the area, one would expect the cross-section for several pieces of rebar to be much less than the area connecting the two walls.  The U value for concrete is much less than rebar, but the rebar takes up such a small cross section area that using the rebar should be much more efficient than leaving the two foundations connected without the foam.  Using some highly simplified assumptions, I have determined that using the rebar has an energy penalty about 14 times less then leaving the concrete connected.  I think its safe to assume that the energy lost is about an order of magnitude less when using the rebar.  Using a data found online, I calculated that the power lost through the rebar could be as high as 0.5 W/ deg C.  So a temperature differential between the outside foundation and the inner foundation of 15 deg would be about 7.5 W.  With the concrete walls joined together the power lost through the wall would be about 9.2 W/ deg C equating to about 140 W.  Assuming that the temperature differential between the foundations is at least 15 C for 1/3 of the year equates to almost 400 kWh of energy or about $40 savings on my electricity bill.  This is significant and has a short payback for the time invested.  But keep in mind there are a lot of assumptions here.  The total energy savings is really still a question left up to energy modeling.  But for the cost of rebar, epoxy, a masonry drill bit (about $70),  and some minor inconvenience associated with doing two pours,  I figured it was worth it.

So far this week I have been pretty sick.  Seems that one of those cold season viruses caught up with me after all winter.  Despite being sick the show must go on and today it chugged ahead.  The house foundation has been poured and the forms will be released tomorrow.  Luckily enough I only had to take pictures.  I'm not sure I was fit for much more than that.  Nonetheless, I am excited that the foundation is half poured.  See some pictures below. 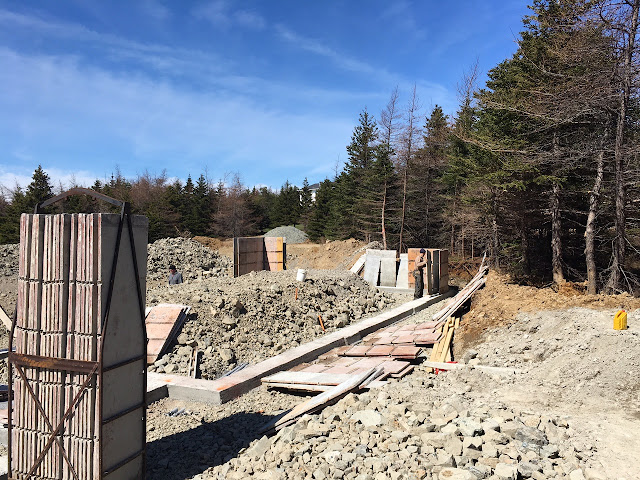 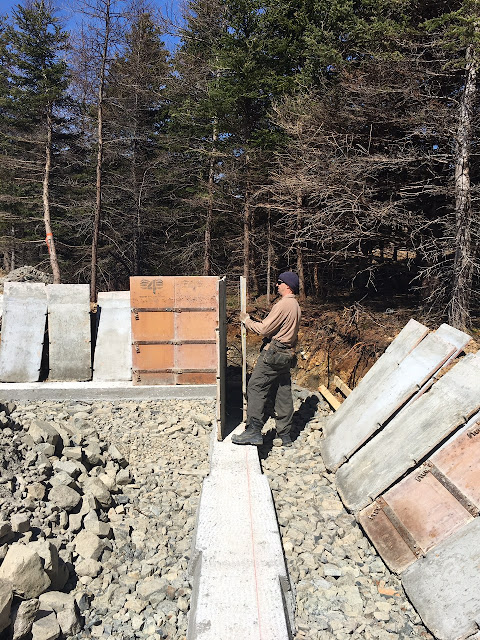 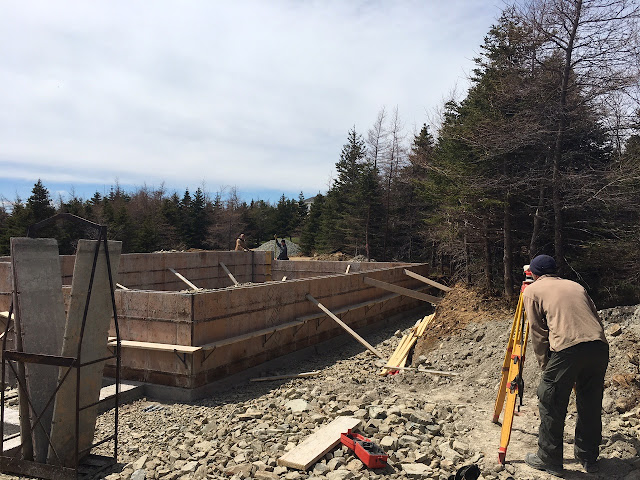 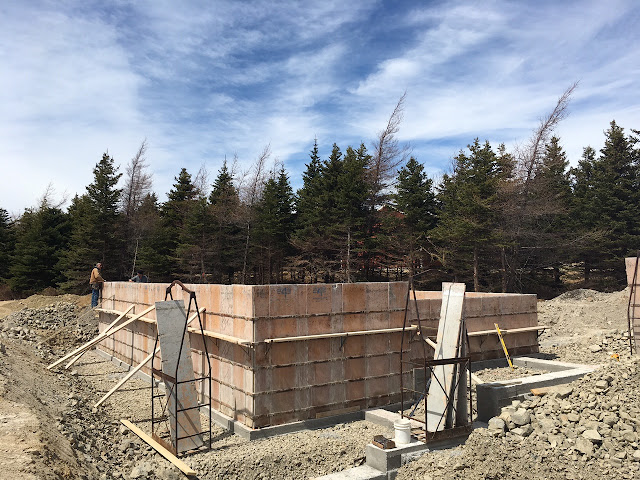 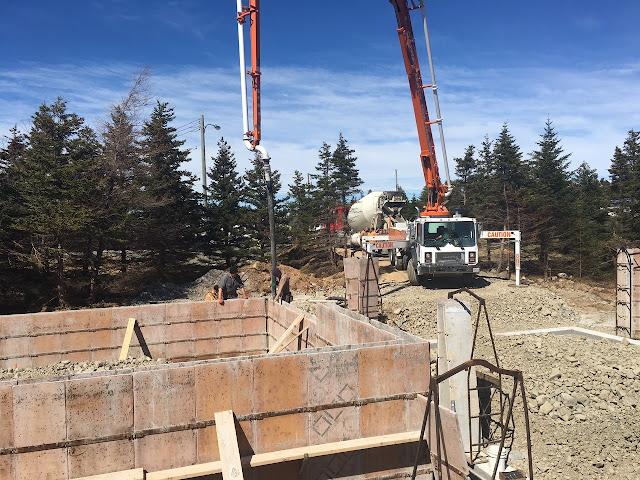 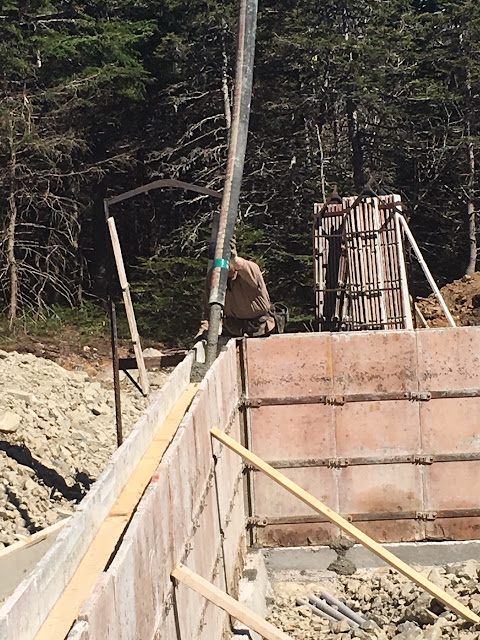 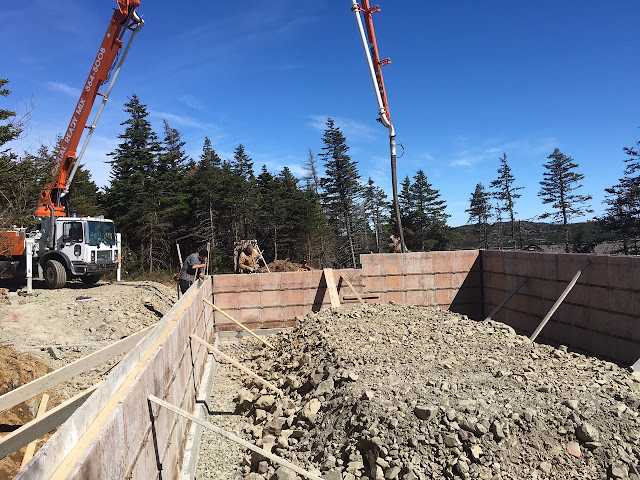 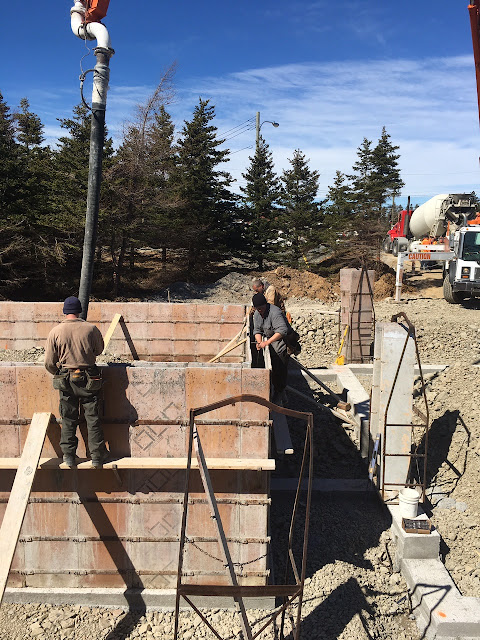 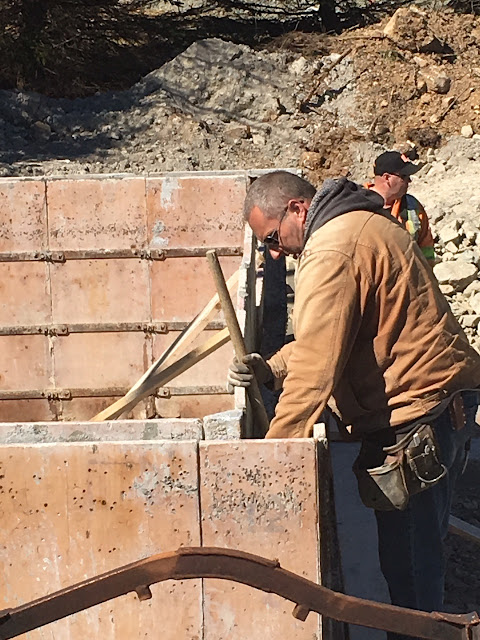 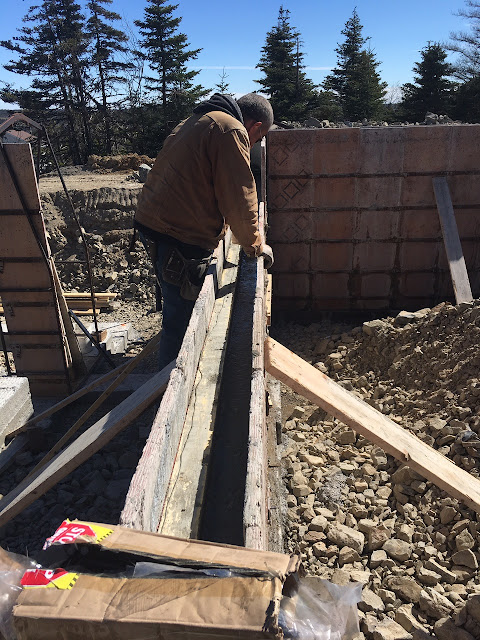