Building the Air Tight Barrier: From the Ground Up.

The typical air tight barrier in our neck of the woods is polyethylene plastic.  Although people call it a vapour barrier, its primary function is an air barrier.  Passive houses also have air barriers and vapour control layers.  In our house that air barrier/vapour control layer is 7/16" OSB applied to the interior of the 2"x 8" stud wall.  In a code built home I have seen how a vapour barrier is completed.  It is usually an afterthought:  patched in like a quilt after insulation has been completed.  Often times there are wall intersections where there would be no way to seal under the stud sill plate.  If you think about how many interior walls can intersect with exterior walls, there will always be a joint at the intersection of the walls that can't be dealt with unless there was some proactive measures with placing an air barrier behind the stud and sealing appropriately before the intersection wall is erected.  Air sealing really should be implemented incrementally as the structure is erected.  Mindfully determining how one detail will tie to the next is important if the structure is to be air tight (ie 0.6 ACH50)

On the main level there is only one structural wall (it holds up the second story floor system only since the trusses span from exterior to exterior) that intersects with an exterior wall.  My air sealing plan mapped out how to deal with intersection.  Photo 1-1 illustrates all the tools necessary to do the air sealing detail (the 3M Tape rolled away with the wind!).  Photo 1-2 illustrates the OSB air barrier installed from the floor to the top plate.  The wood surface,  slab, and vapour barrier was primed with Blueskin primer.   A bead of acoustical sealant is laid along the slab and another bead at the intersection of the OSB and the vapour barrier.   The Blueskin is then stuck to the slab, rolled back to the corner and up the wall.  Once back to the wall intersection, the Blueskin was pushed into the bead of acoustical sealant which then seals against the vapour barrier and the OSB wall.   After the Blueskin is lightly in place using hand pressure only, it was rolled under pressure with a rubber J-roller.  This stuff has an amazing amount of holding power when used with primer and is impossible to remove so marking out a starting position on the slab to ensure the Blueskin wouldn't be seen once baseboard mouldings are on the wall was necessary.  This air sealing detail seems to be a fairly good redundant system.   If the slab were to crack anywhere and compromise the Blueskin seal to the slab the bead of acoustical sealant in the corner will hopefully still be intact.   This detail turned out good (Photo 1-3).  The other joints were caulked with acoustical sealant and 3M tape was applied to the joints then rolled with a J-roller as in Photo 1-4.   We then added 2" of EPS foam to the back of the stud and screwed it to the wall (Photo 1-5).  You may wonder how we will insulate the wall...I'm making some of this up as we go.  Since the the structure won't be weather tight for some time, my thoughts are to fill this cavity with Roxul batt from the outside just before we sheet it in foam.  Roxul naturally sheds water so it may be a good option.

When the house was designed, I decided to beef up the insulation in my garage and porch also.  Most people park cars in their garage.  I park my tools.  I operate a small wood working shop and do most of my woodworking in the winter months so wanted a space that was going to be more energy efficient than my current garage.  This means two things:  the structure needed good R-value with minimal thermal bridging and had to be somewhat air tight....with the exception of the leaky garage door of course! So we opted to do the same as the house (i.e. 3" of type 1 EPS insulation applied with horizontal let-in 2x4 strapping) to mitigate the thermal bridging issue.   Since I would be doing most of the air sealing myself I decided to use acoustical sealant on all OSB joints and 3M 8067 tape applied over it (Photo 2-1 and 2-2).  This is not hard work:  Caulk the joints with acoustical sealant, tape with 3M, and roll under pressure with a J-roller.  Its tedious work mainly because the tape is so tenacious, and can it can become quite with all the wind!  Acoustical sealant is normally messy but with the wind, the strings of acoustical sealant go everywhere so it was important to release pressure on the caulk gun to minimize dripping after a run of caulking.  It took a little over one hour to air seal a 9'x24' wall.

Since the sill will act as the primary air seal to the foundation, I wanted it to perform well.  The detail can be seen in Photo 3-1 and 3-2.  I came up with this detail myself.  I am hoping that it will out peform using the sill gasket alone.  I am using Owens Corning FoamSealR: since it's pretty much the only locally available sill gasket.  It is fairly thin (3/16") and if the foundation wall has any unevenness, it hardly seals at all. At $0.12/ft this stuff is cheap so I figured just use more of it.  Doubling it gives 3/8" but the stuff compresses really easily so the weight of a wall will pretty much flatten it.  FoamSealR was stapled to the bottom of the pressure treated wall plate.  Then the OSB and gasket are primed with Resisto primer.  Resisto Redzone (bitumen based tape) was then stuck to the OSB and wrapped down onto the sill gasket.  This seals the OSB to the bottom of the sill gasket.  Another sill gasket is then placed below the previously applied gasket, sandwiching the Resisto Redzone in a sill gasket sandwich.  The idea is to let gravity do the rest.  The weight of the structure will compress the Resisto tape between the gaskets and the gaskets will deal with any uneveness between the walls. All the Garage and porch walls will be finished in the same fashion.   I figure that that the air sealing details for the garage and porch will cost between $300-$400 plus the labour to install (which is free if you do it yourself!).  This is really pocket change compared to the price of a house so I figured it made sense to do it. 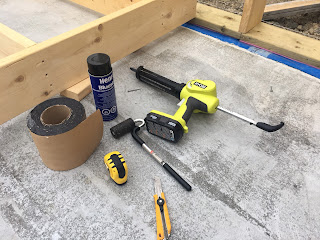 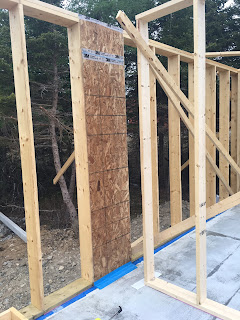 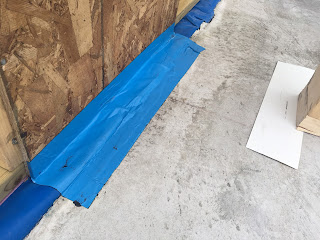 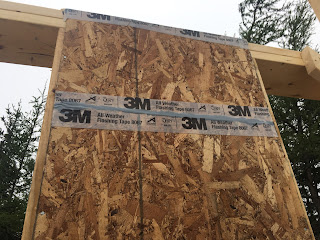 Photo 1-4. 3M Tape applied to joints and around to the top of the top plates. 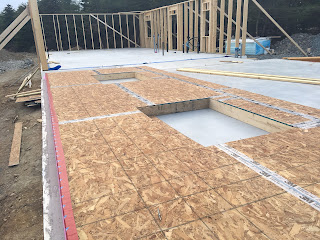 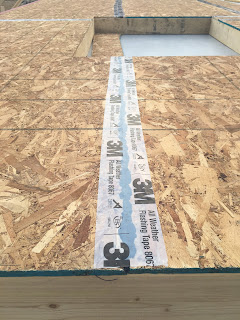 Photo 2-2.  Close up of 3M tape with acoustical sealant applied along the joint. 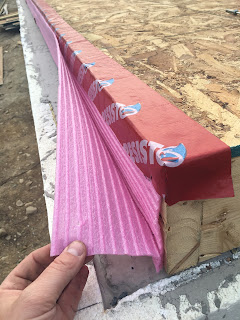 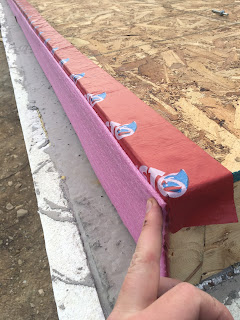