Performance Walls for a Harsh Climate

To ensure that structures are more efficient, Canada introduced the National Energy Code for Buildings.  This code is prescriptive but defines minimum building standards to meet energy efficiency requirements depending on your climate zone.  The adoption of this code has been fairly slow...too bad because it really aims to make a difference...energy efficiency translates to more money in the home owners pocket book and could lead to a large decrease in the rate of global warming.  Have a look at the map below and see if your province has adopted the Code: 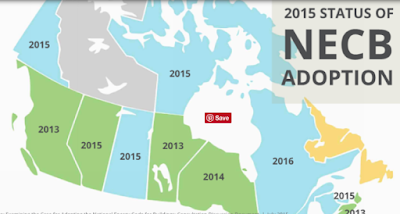 If you said no, you're not completely alone!  There are only two provinces that have yet to adopt the standard!...and you're living in one of them!  Its not surprising that NL is one of them.  Imagine what implementing a new energy standard will do to power sales;  How will we pay off Muskrat Falls if we're using less energy?  Its not necessarily a conspiracy, but it does raise questions about our priorities as a province when the government mandate is to create more energy for consumption when we only have a population of 1/2 million.  And at what cost?  TWELVE BILLION DOLLARS!  I mentioned a hypothetical situation on a previous blog entry where I showed that for less than 600 million we could have outfitted every home in NL with heat pumps and it would have decreased our hot water heating requirements by the equivalent of shutting down the Holyrood generating station for 66 days or a total of about 790 GWh.  In 2011 total GWh production at Holyrood was about 1100 GWh.  Thats like decreasing production by almost 71%.  Heating with heat pumps could have been another option.  It would have decreased heating requirements buy up to 5 TWh or more (i.e. terawatt hours).  Given that in 2011 our total generation was about 40 TWh, heat pumps for heating and hot water could have decreased drain on the grid by a total of about 6 TWh.  That's an impressive conservation measure of 15%!!! and it would have generated about 1.2 billion dollars of economic stimulation rather than sinking 11.5 billion of taxpayers dollars into Nalcor assets.  It could have easily bought another 10-15 years at current rates of population increase.  Seems to me that conservation through good technology and more passive measures should be at the top of the list rather than filling the pockets of Nalcor.  My rant is over...lets continue!!

Did you know that the NECB defines that R23 walls are required for our climate?  When you drive around and look at new homes do you see exterior foam? Probably not.  To attain R23 with 2x6 stud walls, exterior foam really needs to be added to the building when its being constructed.

Enough about the NECB.  Lets talk about the Flatrock Passive House wall system.  Its different.  VERY DIFFERENT!!!  have a look below:


This envelope is built to perform in our climate.  The foundation has 2" of EPS on the outside and the inside.  Under the slab is 10" of EPS amounting to an R-value of about 40!!

The wall assembly is a fairly typical of stud wall construction comprised of a 2x4 stud cavity filled with fibreglass batt, 7/16 OSB taped and air sealed against the slab and rim joists and carried through to the wall system on the second floor.  Outboard there is a 2x8 stud wall filled with batt insulation, followed by another 3" of EPS.  The total R-value is about R50.  The effective R-value is a little less.  This is almost R-20 more than most people have in their attics in Newfoundland.  There is no vapour barrier.  A vapour barrier is actually a Class I vapour retarder meaning it perm rating is less than 0.1.  In a traditional house, the vapour barrier that everybody talks about serves two purposes:  An air barrier and a vapour retarder.  However, vapour diffusion is rarely an issue.  Moisture laden air infiltrating into the structure can carry with it almost 100 times more moisture than would normally diffuse into wall structure through painted drywall alone. This traditional vapour control layer has been replaced with OSB in this case creating a vapour open structure on either side of the vapour control layer so the wall can dry out via diffusion should moisture infiltration ever become an issue.

The ceiling assembly will have 26" of loose fill insulation giving an R-value of almost 90 in the attic space. Our plan of attack for building the wall system is fairly simple and pretty much the same as any other house.  The 2x8 stud walls will be built flat with window bucks attached.  It will be erected on the foundation and sheathed with foam on the outside.   The second floor will be constructed in the same fashion.  Trusses will be erected on the roof and the roof shingled.  Attic baffles will be installed before sheeting the ceiling in OSB.  All OSB joints will be air sealed using 3M 8067 tape.  The air seal will follow around the rim joist using tape and spray foam.  We will air seal all buck corners and install and air seal the windows according to the prepared drawings.  Once the tyvek is on the building we'll insulate the inside 2x8 stud bay and then apply the interior OSB and air seal all seams. At this point we'll bring in my energy advisor, Brad Dunn with Amerispec to complete the blower door testing. (http://energyevaluationstjohns.com/newfoundland-energy-advisors/)

Once we're sealed up  as good as we can get (hopefully 0.05 cfm/sqft of gross envelope area or better) construction will continue.  We will bring in Brad several times to envelope for air tightness.   There will may be a need to spot check air sealing as we go so Brad is aware that we will need his services as we move forward.  I am planning on doing 5 tests total during the construction to ensure we meet the air tightness specifications.  Air tightness does several things:  It decreases random infiltration which can lead to long term durability issues and it increases energy efficiency.

So there's the wall....and the plan...now I just have to cross my fingers!