Who would have thought that putting a wood stove into a house could be so complicated!!!  I know I didn't.  It really started when we decided to put the wood stove more centralized in the home.  Running a chimney inside the building envelope is much more efficient than running it outside the thermal envelope from many perspectives.  The chimney will develop draft much more quickly if the chimney runs inside the envelope, and there is less thermal bridging to the outside.

Have a look at the stove in question below, the Walltherm gasification boiler (www.waltherm.ca).  The picture below illustrates the back of the stove.

It has a sealed combustion chamber with an air intake at the bottom that is ducted to the outside.  It is a closed combustion system.  This is a necessity in a passive house for several reasons

1.  Draft in the chimney requires air to be pulled into the stove.  In a super tight house, the draft necessary to keep the stove going will be hard to make up if the walls are too tight, required a window to be opened while burning the stove.
2. Dangerous backdrafting could expel dangerous carbon monoxide into the space.  With normal code built homes this is dangerous enough.  If the natural air exchange rate is 10 times less, you'll be feeling sleepy pretty quickly!

Having a carbon monoxide monitor is a necessity for most homes and a passive home is no exception.

Below is a schematic of the living room.  The wood stove was meant to sit adjacent to the kitchen/living room wall.  The air intake duct was going to be poured under the slab and out to the south side of the house where it would come up from under ground.  It would work but coordinating the air intake with the chimney placement proved to be more complicated than originally planned. 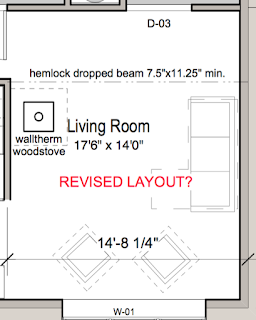 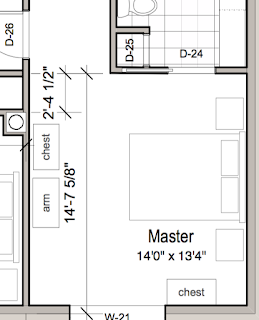 In the picture above, the chimney runs in a chase in one of the upstairs bedrooms.  The chimney thimble requires a 7" offset from the kitchen/living room wall.  Somehow the chimney would have to jog across two joists and up through into the chase.  To add insult to injury, the thimble can be air tight but the attic radiation shield has to maintain a 1" clearance to the prefab chimney.  See below.   The ERSA (radiation shield) can't be caulked, or modified in order for the system to meet code. 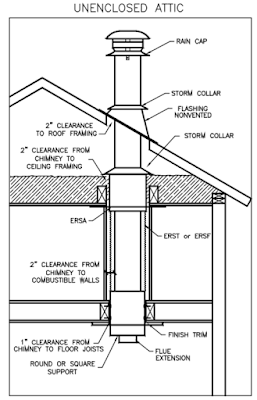 In which case, there is no way to make the setup air tight unless you make the chase for the chimney air tight.  This is doable but complicated.

Instead we opted for the traditional approach:  Out through the side wall (with modifications to the wall) and up through the porch roof.  See Below: 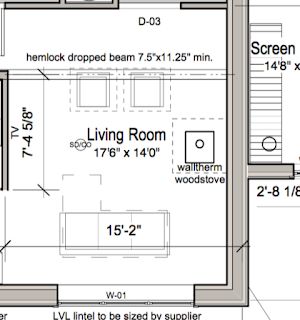 The air intake is also ducted to the porch and out through the back wall of the porch.  Its labeled on the diagram as "cover for wood stove air intake".  In order to meet clearances and the fact that the wall thimble is only 12 Inches thick, we had to jog the wall on the inside of the house to a smaller thickness.  I think it will look fine.

This setup can be air sealed nicely and will meet the specifications of the manufacturer.  I can feel the warmth already!!!!