The numbers are in!  And there are lots of them! and they're all good!  The first round of energy modelling has been completed.  Based on the model and the orientation of the house on the lot, the energy usage looks great.  There are too many numbers to talk about so I'll focus on the important numbers.  The PHPP software used to model the home is quite complex.  The data entry is exhaustive and it contains information from the transparency of windows to the air change rate related to the wind blowing on the building (based on the weather data)!

The BLUE columns show the energy lost by the building and the RED columns show energy gained by the building based on our climate.  Windows typically drain energy from a building in the winter.  However, if oriented properly the winter solar gains can offset the loss through the windows.  In our model, the south windows gain slightly more energy than the total lost through all the windows in the envelope!  This is a great start!  In the summer, the south facing windows gains quite a bit more than is lost but ventilation alone takes care of much of the heat.  The main windows causing this are on the main level since there is no shade structure.  The model shows that added solar screens to the outside of the building cuts this by 60% since they decrease the solar irradiance by about 50%. 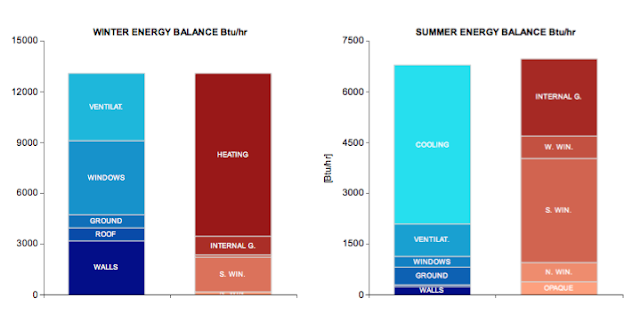 What does all of this mean?  Well lets decipher the balances and try to put this in perspective.  First I want to talk about Demand or total yearly energy usage for heating.   I'll use kWh to represent this rather then the BTU convention used in the diagrams.  Look below at the plot.  Summing up the red bars (in BTU and converting to kW) in the plot gives a total energy usage of 17kWh/sq. m. for heating during the whole year. 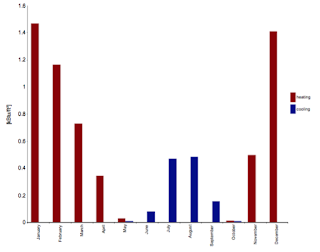 How does this compare to a code built home?  A typical code build home uses about 70 kWh/sq. m.!  So the model estimates a 75% savings in heating cost alone!!!

How about the load on the coldest day of the year?  In the load bar plot above, the total heat used by the building is about 13000 BTU/hr or 3.8 kW!!!  This is amazingly small for a house that's 2176 sq. ft.  In fact, the heating load per square meter was determined to be about 13 W/sq.m.!!  Most code built homes are about 5-10 times this number!

One of the principles of passive house is adding renewable energy to further decrease the total energy usage.  Do you think that you could be on the grid and minimize energy usage below this while still living comfortably?  You betcha!!!  Using a unique approach, we have further minimized our electrical consumption by another 3000 kWh!  Our total estimated electrical energy usage will be around 7300 kWh.  If all goes as planned...and it will, our estimated monthly electricity bill will be $86.30! This includes the HST tax and the monthly service fee.    Compared to a code built home, the bill would be $245.67.  That's a savings of 65%.  I'm pleased.

With a total energy savings of about 65% and the heating requirement that's 75% less than a code built home of the same size, The Flatrock Passive House is on the road to be the most energy efficient detached home in Newfoundland!