I probably mentioned before that I would cringe every time we had to drill out through the air barrier.  Every time I drill through it I would wonder if I could get back to the level of air tightness I achieved on the initial blower door test.  With almost 21 penetrations for electrical, plumbing, mechanicals including the HRV and wood stove, it seemed like it would be impossible to achieve the level of air tightness required to get the efficiency I wanted.  However, with good air sealing details, the task wasn't as hard as I originally thought it would be.  Custom gaskets, lots of acoustical sealant,  and 3M tape just crush any chances of air getting in!

Previously installed conduits where wires were routed were filled with spray foam.  Plumbing sewer pipes that were vented to the outside were tape sealed.  The air vent for the wood stove and the chimney thimble were sealed with plastic and tape.

The biggest problem area was routing wires through to the garage.  Installing conduit in this area was impossible.  In retrospect, I wish I had routed conduits through the rim joist before we spray foamed it.  We simple had to drill the holes, fish the wires and rely on spray foam for the air tight seal.

During the previous blower door test the manometer (DG-700) kept reading LO with intermittent readings.  Brad suggested that a "C" ring could be installed that would give a more accurate reading.  He had never seen a house so air tight so he didn't need one for his blower door.  So rather than dialing in the fan speed to give a pressure of -50 Pa and getting spurious measurements with unknown margins of error, we carried out a multi point approach at much higher pressure.

Once the blower door was installed, we initially dialed in -50 Pa.  I was a little scared but when I saw "LO" on the screen with intermittent readings I had a sigh of relief!  We turned up the fan speed to achieve a negative pressure of  about -100 Pa.  At this point the manometer was giving constant readings.  The system gives a new reading about ever 5 seconds.  The readings were recorded and then a new pressure was dialed in.  We continued until I felt that we had enough numbers.  I would have liked to get a more even distribution of reading but it was hard enough writing down numbers with one hand while two of us held the blower door in place.  The pressure was high enough that we had to hold the blower door frame against door weather stripping or the depressurization would pop the blower door out of the door frame!  Figure 1 shows the results of the blower door test plotted after calculating the natural logarithm of the CFM and pressure data. 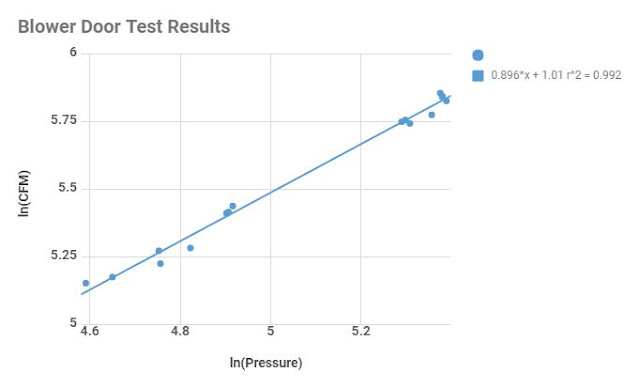 Once a line is fitted, CFM50 can be calculated and used to determine ACH50 and CFM50/sf.  given the R^2 of the results ie 0.992, I trust the linear fit.  However, any non-linearity outside the known data could lead to estimation errors for CFM50 so I am proceeding cautiously with accepting the analysis.  The final CFM50 was determined to be 91.4 CFM giving values of 0.015 cfm/sf of envelope area and 0.29 ACH50!  Brad (Amerispec NL) told me during the previous blower door test that it was likely that the house was tighter than the system was reading because we were using the "B" ring on his apparatus and it was at the limit of it's calibration range.  He was right!  Looks like the house is more airtight than originally thought.  As it currently stands, the house is about 5 times tighter than R2000.  I am pretty happy about this.

I decided to run some numbers through the WUFI model for the house.  Using the difference between site energy calculated for an air tight home and one with my currently level of air tightness I get a value of 338 kWh.  This tells me that natural infiltration will cost me very little ie. $42 per year based on current electricity rates and tax included.  Many new homes have a level of air tightness around 5 ACH50.  I decided to enter 5ACH50 into the WUFI model.  At this infiltration rate, the site energy usage jumps to approximatly 6800 kWh and heating load more than doubles.  Keep in mind that this model is still using passive house levels of insulation so I would expect conventional construction to lead to more significant energy usage.

The garage is outside the thermal envelope of the house.  I did have a mandate from the design stage that I needed an energy efficient building.  I typically use the garage as a woodworking shop so a certain degree of comfort was required during the winter when I use it most.  In previous posts I provided some details about the thermal envelope: Walls 2x6 fiberglass with 3" EPS exterior insulation, 4" EPS under the slab, 3" EPS insulation on the frost wall, and about R60 in the roof.  During the build I carried out all the same air sealing details as used on the OSB inside the house.  Transitions of the air barrier from the outside of the OSB to the inside were planned and vapor barrier was installed before framing continued to the next stage.  A lot of work went into this; more than most people would even consider.  I was curious about the level of air tightness achieved.  It was a difficult to air seal so I wanted to know if my work paid off.  We used the same method as above to acquire the data.  The data plot looked similar but less noisy.  This is likely due to the fact that we were able to set up the blower door frame so that it was butting against the door stops.  Depressurization just made the frame sit tighter against the weather stripping and we didn't have to fight to keep it in place. 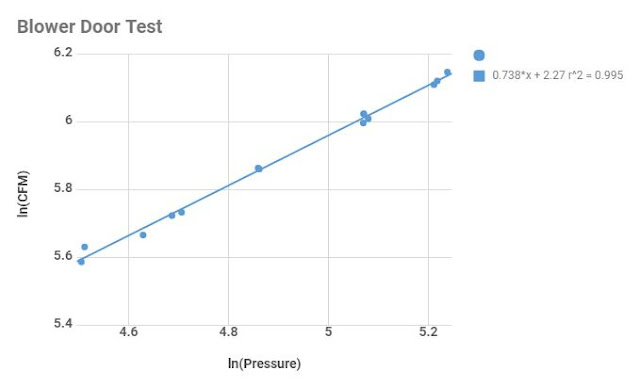 Once again, the R^2 value (better than the house) gives me confidence that the results are good.  Extrapolation doesn't take into account any potential effects that could influence the results at lower air flow but nonetheless it is still a better metric than none.  The calculated ACH50 worked out to be 0.92 corresponding to CFM50 of about 174 CFM!  This is a great outcome!  Armed with these results and the construction details, I can use these numbers to roughly figure out the requried heat load, and yearly heating costs....in another post.....