Air Barriers, Wiring Chases, and Protection for a Foam Foundation

Things have been slooooowwww.... For reasons that I may decide to document at a later date, my siding contractor is not on site anymore and will not be...ever.  Lets just leave it at that for now.
The company that I hired for framing my house (Keocan General Contracting, Inc.) will be taking over the cladding installation.   In fact, the last photo of the house did show the guys from Keocan onsite and the progress they had made in only two days (Photo 1-1). They did get started but ran into some things with another job that required putting mine on hold.  This being said, I am grateful to Patrick (Keogh) and his guys for taking on the job on such short notice.  My experience is that he is trustworthy and will get the job done to my specifications.

To keep the build moving along we have been picking away at various things so they would be done once they get on site to finalize this stage of the build.  They will complete the cladding installation and then the interior framing.  To get ready for the interior framing, we had to complete a couple of jobs.  The ceiling upstairs has OSB attached directly to bottom of the trusses since it is part of the air barrier.   In order to maintain the integrity of the air barrier we want to keep all wiring inside this barrier.  Creating a chase for wiring on the ceiling involved strapping with 2x4 @ 16" o.c.  This strapping will actually serve another purpose:  it will provide a surface for attaching drywall.  We wanted to make sure that the first piece of strapping along the longest wall was straight so all others would follow.  Although not necessary, this first strap would provide the uppermost plate for the service wall.  Once it was verified to be straight, using  a straight line as a reference, it was nailed with two 3" galvanized nails using a framing nailer.  The plans specified that the straps should be nailed directly into the bottom of the trusses.  Using the nailing pattern on the OSB made the nail placement easy.  For the most part, the pattern always coincided the truss pattern above.  If not, we used the position of the nails in the OSB as a reference for where to nail the 2x4 strapping.  Once the starter course was in place, the other courses were marked at both ends of the building and a chalk line was used on the ceiling the mark the edge of the next course of strapping so that the strapping fell 16" o.c.  (Photo 2-1, 2-2).  The attic hatch took a little ingenuity but was easy enough once we pondered for 15 minutes.  We trimmed around the hatch hole with pieces of 2x4.  3M tape was wrapped from the surface of the 2x4 back up onto the surface of the vertical OSB buck (Photo 2-1).  Eventually this tape will be part of the air sealing detail for the attic hatch.

The mud porch is outside the thermal boundary of the main house structure.  This makes the porch a part of the air tight boundary for the garage.   I was not looking to achieve Passive House airtightness here.  However, I do want some efficiency since I will use the garage regularly as a workshop.  For the most part the air tight barrier for the garage/porch was the exterior sheathing (you can see some taping details here at the exterior - http://flatrockpassivehouse.blogspot.ca/2017/06/building-air-tight-barrier-from-ground.html).   However where the house meets the mud porch there is nothing....Just a foam wall.  Details here took some planning ahead.Where the porch met the house, I wrapped a peice of vapor barrier to the interior from the outside before it was erected.  When I get some time I will post the detail online.  We also used this detail at the top plate of the wall before the trusses were placed.  The vapor barrier is taped and caulked at the exterior OSB and was left dangling at the inside until it was needed.   Using a vapor barrier between the house and mud porch would be bad since it would create a vapor sandwich with the OSB at the interior wall.  Instead I opted to use tyvek.  It can act as an air barrier but it is vapor permeable.  Strips of vapor barrier were caulked and stapled to the truss along that wall effectively sealing the strip against the truss and the wall.  I ensured that staples were applied through the vapor barrier and the acoustcal sealant.  The tyvek was then stapled and rolled up the wall and sealed with tape and acoustical sealant to the hanging vapor barrier.  Staple holes were covered with Tuck Tape.  At the floor, a bead of acoustical sealant was used with 3M tape to affix the tyvek to the slab.  We also needed a way to run wires for plugins or switches so opted for a similar approach as used on the second level ceilings of the house.  We used 2x4 strapping at 16" o.c. attached vertically to act as a wiring chase.  The wall will eventually be covered with ship lapped board (Photo 3-1)

Photo 1-1 shows what happens to EPS foam when exposed to the sun for a long time: Ultraviolet light starts to break down the surface and it becomes yellow and powdery.  Running your hand along it releases the powder like a puff of smoke.  It really needs to be protected from the environment.  The construction drawings recommended the use of galvalume flashing to protect the foam.  The flashing would have to extend from under the sill flashing hanging under the siding and all the way down to the ground.  I am not a metal worker.  This detail for me was not a DIY solution.  In addition, areas of the foundation which were up to 3' high would need some way to permanently attach the flashing all the way to the ground.  Instead I opted for a cheaper, simpler method: parging!  Newfoundland Styro (Truefoam) offers a product called Parge-Plus (Photo 4-1).  It is a fibreglass reinforced acrylic modified mortar.  It sticks well to foam but not when its cover by powdery yellow dust from environmental exposure.  To begin I scrubbed down all the foam with a stiff bristled deck broom.  I then rinsed and brushed and rinsed again in order to get a good clean foam surface for the Parge-Plus.  I just followed the instructions for mixing but opted to mix a half bucket at a time.  I just used a clean bucket, clean water, and a drill with a mixer attachment.  Its important to add cement to water and not water to cement.  Don't try the latter....you will be dissapointed.  I have worked with concrete and mortar before so I was no stranger to working it.  It does take some practice working it properly with a trowel.  I worked in 3' - 4' sections.  This stuff starts setting quickly, so after each section I would float the surface to help take out some of the irregularities and make it smoother looking.  I then used a wide deck staining brush to texture the surface by pulling the brush along.  This also helps cover areas where you join one section to another and between mixing new batches.  Once completed it looks like a concrete foundation (Photos 4-2 through 4-4).  Just to compare, Photo 4-5 and 4-6 show before and after.  The parge makes the foam look much like a traditional concrete foundation.  I think that the result is great...well as great as a concrete foundation can look! However, it looks much better than yellow foam! 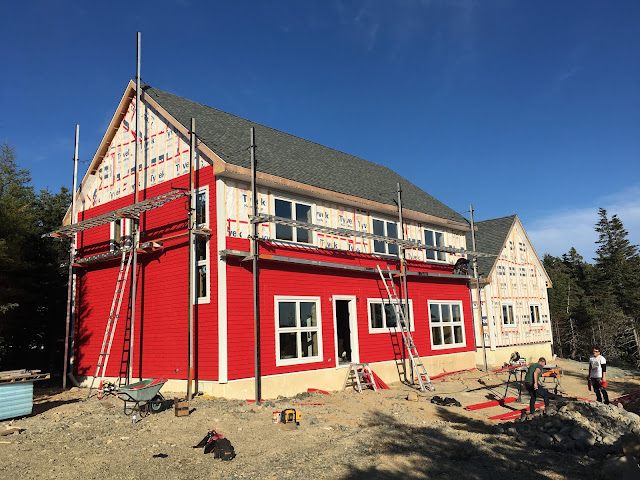 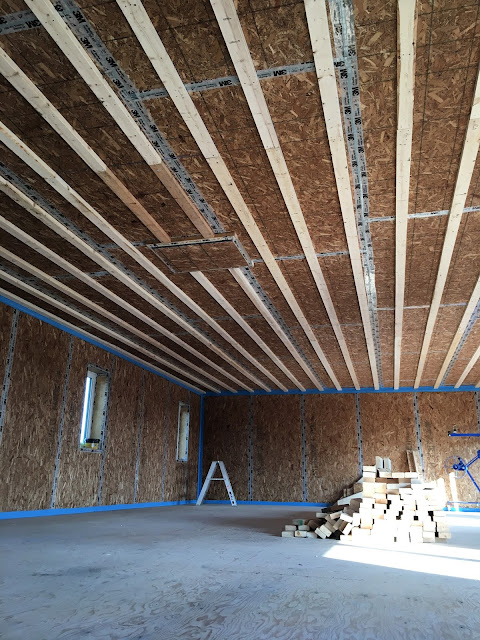 Photo 2-1: 2x4 strapping installed on the ceiling to act as a wiring chase. 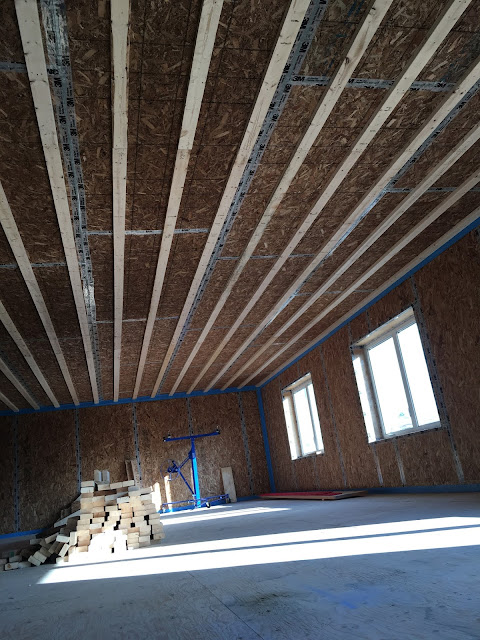 Photo 2-2: 2x4 strapping installed on the ceiling to act as a wiring chase. 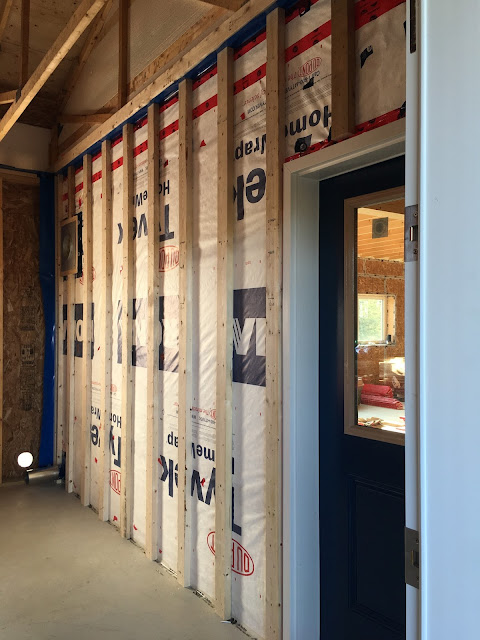 Photo 3-1.  Tyvek and strapping form part of the air tight barrier for the mud porch/house intersection.  Notice the strips of vapor barrier along the wall corners.  They will be used once we attach a single continious sheet of vapor barrier to the ceiling. 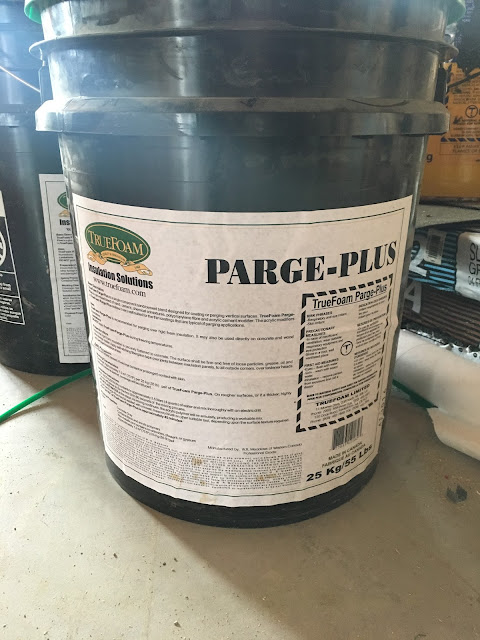 Photo 4-1:  Foam parge.  A thin coat will protect the foam for years to come. 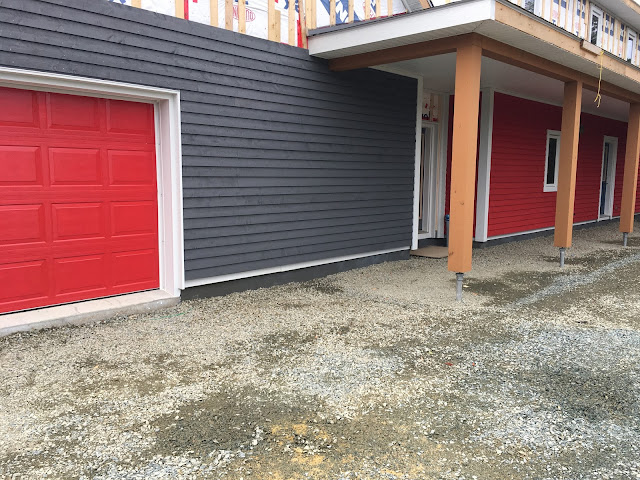 Photo 4-2: Parge applied to the front. 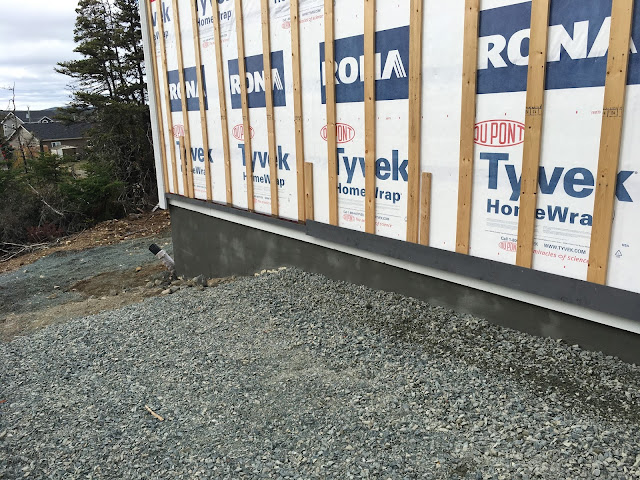 Photo 4-3: Parge applied to the side of the garage foundation. 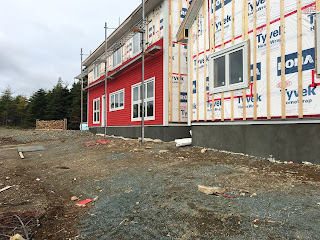 Photo 4-4: Parge applied to the south side of the house foundation.

Photo 4-5: Before parge was applied 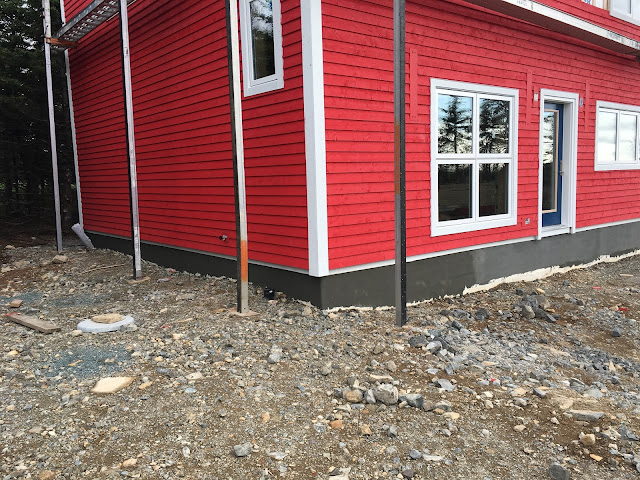 Photo 4-6: After parge was applied.  The dark section has not cured but will look like the lighter section in a day or so.